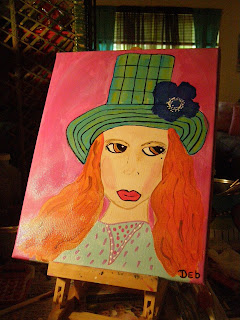 I've been painting again and it has been making me feel so good! My other favorite past time is my love of books...reading, reading, reading! I love to read!  My sister, Kathy, gave me a Nook for Christmas and I have been a "reading fool". Also, what I love about my Nook is through Barnes and Noble, I can download ton's of FREE NOOK BOOKS....and, Who doesn't LOVE FREE!

Now, usually my favorite genre of books is thrillers....mysteries.....an occasional Nora Roberts romance thrown in for good measure. So, when I started downloading tons of free Nook books, I discovered an author by the name of Alex Albrink. Alex writes predominately Sci-Fi novels, but, the 1st one was Free, so, I thought what the Heck! The name of the 1st book of his I read is A Question of Will....which is the 1st book in his Alomenti Saga. I, have now finished all 6 of the books in this series, and I loved them!

In the books, there is a character called Athos and he wears a t…
9 comments
Read more 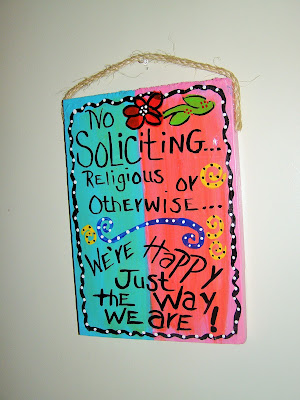 It is raining cats and dogs here in south Georgia, but, oh so peaceful also....and relaxing! So, today was my youngest sister, Rebecca's, birthday...I can't believe she turned 47! I was 13 when she was born and she instantly became my best friend.....and has continued to do so all these years. I tell people all the time that I'm so lucky that my two sisters are the BEST ever!

Our family has a great time when we are all together.....laughing out loud and even some crying, but, one of the main themes throughout most of our conversations is humor! One of our favorites comedic shows ever is Saturday Night Live and one of the best skits ever was Land Shark! People coming to the door soliciting.....from Jehovah Witness to Land Shark(an actual shark)....

so, taking that theme, I painted my sister a new sign for her door:


Needless to say, Rebecca loved it! I've been asked to make several more for friends which excites me. I hope you enjoy and like the painting.... 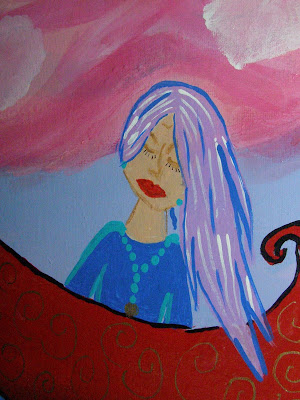 I love being close to the ocean...I find myself being more mellow.....centered and grounded...and, yes, serene.

So, the 1st of the week I saw a picture of a woman in a boat on a television ad, and I thought, how I wished I was out there with her, and, hence, the idea for Serenity came about. I hope you enjoy it:


I used acrylic paint and also my new paint markers, which I had been wanting to incorporate into my paintings. I love the use of the gold to accentuate the waves and the signs in the boat. I also loved using the different shades of blue and pink to make the look of the sea and the setting Sun.

So, with that, I hope that each of you have a beautiful and serene Sunday.

Sprucing Up My Desk! 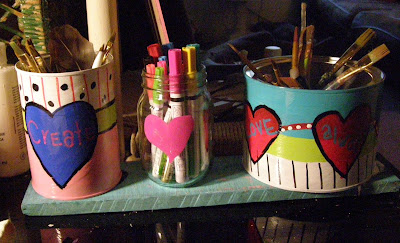 Good Morning from a dreary and rainy South Georgia....

It has been raining since last night....although, my poor doggy doesn't like to get his feet wet and acts like he is a purebred....we really need the rain.....so, I can not really complain.

As, I have shared many times....my small, one bedroom apartment doesn't give me that much room to have a craft room anymore like my house did....so, I work and create at my desk. But, this week, while I was cleaning out my huge storage closet, I ran across my box of empty coffee cans and mason jars. I have been wanting to decorate some of the cans and jars to hold all my paint markers and paint brushes. So, guess what I did?

Simple and painted cans and jars, can certainly add a little bit of color and happiness to a dull spot......

I just love them and they did exactly what i wanted and that is when I sit down at my desk...I smile! 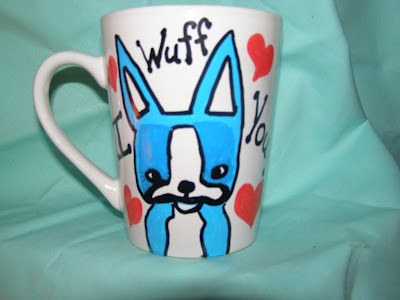 Well, it is Spring here in south Georgia with all the flowers in bloom....which means pollen! Allergy season is upon us! So, have I told you how much I love coffee? I think I have mentioned that in many posts....I love my java.....so, do my children.....both of my sisters....and, of course, my Mom! When, you open the cabinet over her coffee pot, you can see many types of coffee mugs and plenty of them! It seems they coffee mugs are always a standard gift for Mom on special occasion's, which makes sense, since every time our family is gathered, there is always a pot of coffee brewing. Guess what I made and gave Mom for her birthday on the 14th? You got it...hand painted coffee mugs!

Two of the things you need to know about our family is we all love animals, and, most of us have wicked senses of humor....including Mom. I had seen these two mugs on a craft site and just knew Mom would love them. I had purchased new porcelain paint markers from a local craft store and pic…
6 comments
Read more 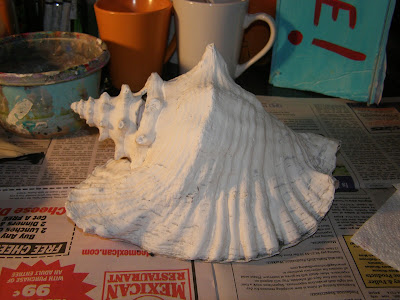 Wow, it has been so long since I posted a new project, but, here I am! So, it seems Spring may be coming here in rural southern Georgia, even though I know there will still be cold days ahead. While these warm days are upon us, my neighbor, Ms. Flo and I have started working in our garden planting veggies and herbs and I thought I would paint us some cute garden art.

I had three huge shells, and decided to paint them bright, vibrant colors......

I have trouble with my hands shaking when I have to hold an object to paint, so, the shells are not my best.....but, I just love them and they have just brightened up the garden so much! I hope you enjoy them also! 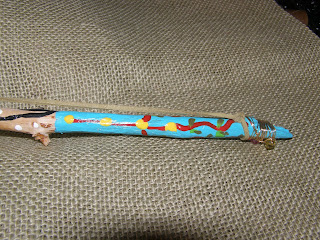 I have taken some time off from crafting and painting to take care of some health issues I've been having and still have some ahead of me, but I took the time to make a special gift for my "only" brother's 55th birthday January 13th.

At, almost 5 years of age, I was blessed with my only brother...Jacob Richard Minchew...or as our Daddy called him "The Pattern" because he was One of a Kind....or as my sisters and I called him, Dickie. Even though our Dad was a lawyer, he was also a consummate outdoors man! He had been raised on a rural family farm in south Georgia, so, he instilled in each of us a love of the outdoors, and none of us took to that more than Dickie. By the time he was a young man, his knowledge of hunting, tracking, plants, woods was just amazing! Dickie could tell you almost anything you needed to know about the outdoors and this knowledge only grew into his adult life even more.

Also, like our Daddy, he has never l…
6 comments
Read more
More posts